Selfie With A Skunk 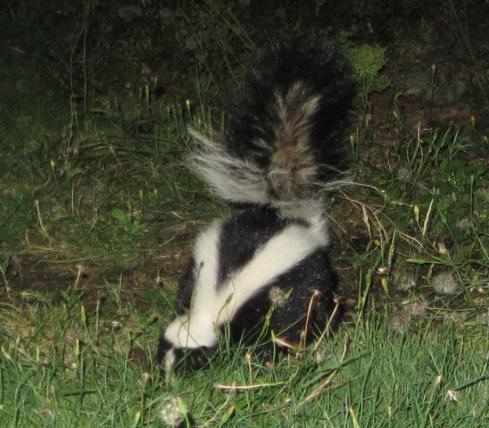 An unusual title, but the event that gave the title led me to ponder, “Why do people hate picking up the phone and prospecting?”

Recently I was lucky enough to be in Vancouver. It’s a beautiful, friendly city with lots to see and do. I was only there for a couple of days and trying to make the most of my break.

Late in the evening my wife and I were strolling past a garden area, when I heard rustling behind a bush. Naturally curious, I investigated and saw a Skunk going about his business of foraging and scratching around finding food.

He was a well fed, healthy looking beast that was clearly very effective at its job.

The correct approach here would have been to continue on my way. However, the natural child in me came to the forefront and my first thought was “Selfie with a Skunk!”

I fumbled with my phone, making a few failed attempts to get the selfie and each time getting a bit closer so the flash would catch both me and my new furry friend. Then the mood changed. The previously tolerant, but now rather irritated omnivore decided to weigh in with his own opinion of my intrusion into his personal space.

I’ll come back to that in a moment. There is a real parallel here with cold calling sales people. The Prospect is going about their business, just trying to make their way in the world, when they get an uninvited call from a salesperson.

The salesperson often has an agenda, which is more about satisfying their own needs than the Prospects. The salesperson has little respect for the Prospects time or current situation. The Prospect may start off being tolerant and polite, but will soon lose patience. There is frustration and irritation at both ends of the phone.

Is there a better way? Absolutely.

I’m running a Sandler “Get past the Gatekeeper and Get More Appointments” session on the 2nd February 2017 at my Training Suite. It’s a four hour session giving proven methodologies in how to have a prospect-orientated phone conversation, to discover if there is a real reason to do business.

If you or your team has an aversion to picking up the phone and speaking to strangers in order to prospect for new business, this session is for you.

What happened with the Skunk? He decided I wasn’t his new best friend. He didn’t trust me to get any closer for a selfie and he wanted me out of its world.

He did what Skunks do, started running towards me grunting and snarling.

I decided to park the thought about the selfie and get out of the range of any artillery the Skunk may want to fire at me, as fast as I could.

I’m sure, one day, a CCTV video will pop up on YouTube with a guy sprinting down the road like a pantomime Dame, apparently screaming like a teenage girl, being chased by a Skunk.

For the record, it wasn’t me- I’m far too cool for that sort of behavior.

So, if you don’t want to stink at prospecting, Book in now.

With over 25 years sales experience, I now train clients across the Staffordshire and Cheshire area. My passion for ethical and professional sales has allowed me to develop decades long relationships with many blue chip clients. My last corporate role was General Manager and Sales Director for the Europe, Middle East and Africa (EMEA) region with a global market leader in automation and communication systems.
Share this article:

Are Your Prospects Wasting Your Time?

3 questions to ask yourself when hiring